The Church is Responsible for the Sins of Her Members 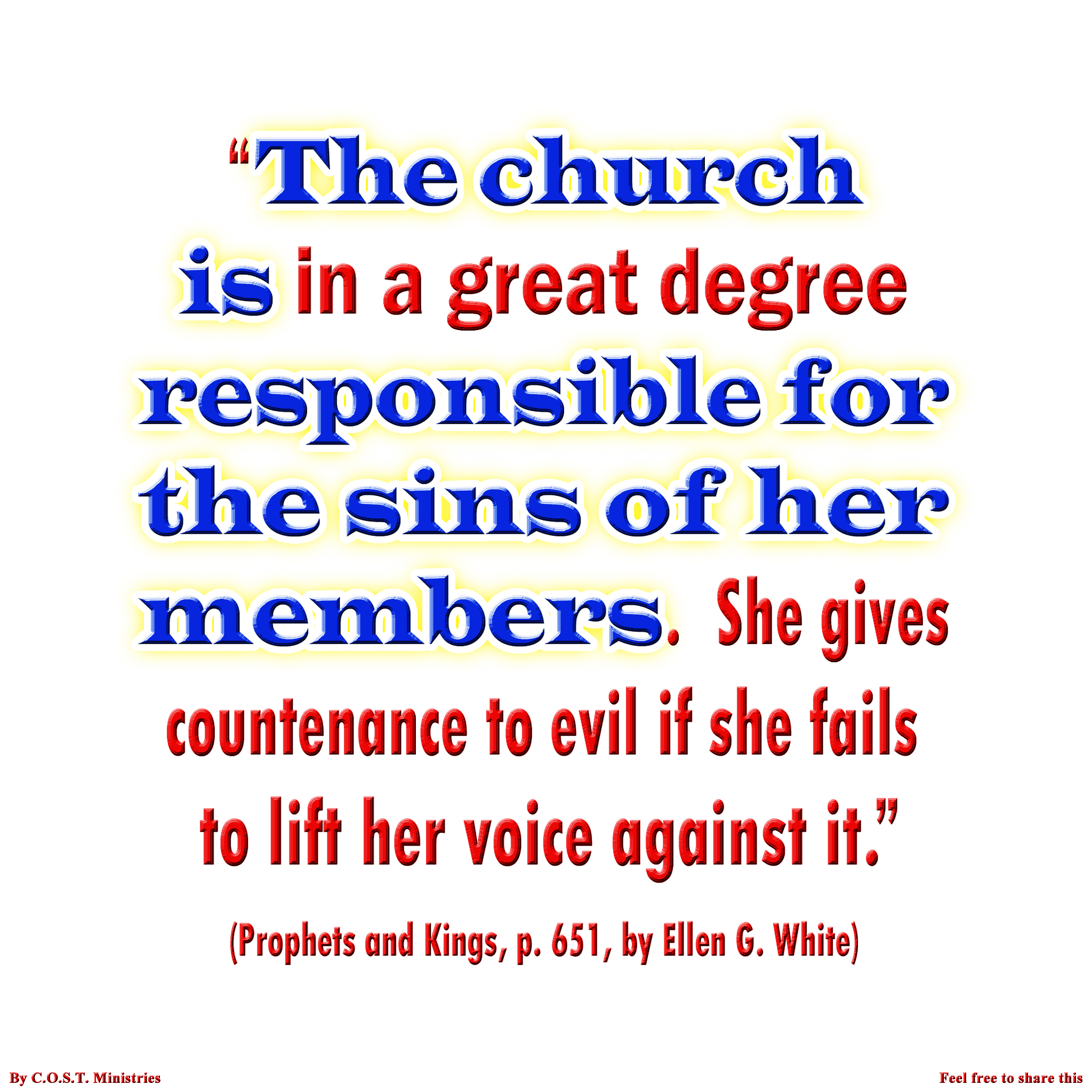 “THE CHURCH IS in a great degree RESPONSIBLE FOR THE SINS OF HER MEMBERS. She gives countenance to evil if she fails to lift her voice against it.” (Prophets and Kings, p. 651, by Ellen G. White)

“The wall of Jerusalem had not yet been completed when Nehemiah’s attention was called to the unhappy condition of the poorer classes of the people. In the unsettled state of the country, tillage had been to some extent neglected. Furthermore, because of the selfish course pursued by some who had returned to Judea, the Lord’s blessing was not resting upon their land, and there was a scarcity of grain.

“In order to obtain food for their families, the poor were obliged to buy on credit and at exorbitant prices. They were also compelled to raise money by borrowing on interest to pay the heavy taxes imposed upon them by the kings of Persia. To add to the distress of the poor, the more wealthy among the Jews had taken advantage of their necessities, thus enriching themselves.

“The Lord had commanded Israel, through Moses, that every third year a tithe be raised for the benefit of the poor; and a further provision had been made in the suspension of agricultural labor every seventh year, the land lying fallow, its spontaneous products being left to those in need. Faithfulness in devoting these offerings to the relief of the poor and to other benevolent uses would have tended to keep fresh before the people the truth of God’s ownership of all, and their opportunity to be channels of blessing. It was Jehovah’s purpose that the Israelites should have a training that would eradicate selfishness, and develop breadth and nobility of character.

“God had also instructed through Moses: ‘If thou lend money to any of My people that is poor by thee, thou shalt not be to him as an usurer.’ ‘Thou shalt not lend upon usury to thy brother; usury of money, usury of victuals, usury of anything that is lent upon usury.’ Exodus 22:25; Deuteronomy 23:19. Again He had said, ‘If there be among you a poor man of one of thy brethren within any of thy gates in thy land which the Lord thy God giveth thee, thou shalt not harden thine heart, nor shut thine hand from thy poor brother: but thou shalt open thine hand wide unto him, and shalt surely lend him sufficient for his need, in that which he wanteth.’ ‘For the poor shall never cease out of the land: therefore I command thee, saying, Thou shalt open thine hand wide unto thy brother, to thy poor, and to thy needy, in thy land.’ Deuteronomy 15:7, 8, 11.

“At times following the return of the exiles from Babylon, the wealthy Jews had gone directly contrary to these commands. When the poor were obliged to borrow to pay tribute to the king, the wealthy had lent them money, but had exacted a high rate of interest. By taking mortgages on the lands of the poor, they had gradually reduced the unfortunate debtors to the deepest poverty. Many had been forced to sell their sons and daughters into servitude; and there seemed no hope of improving their condition, no way to redeem either their children or their lands, no prospect before them but ever-increasing distress, with perpetual want and bondage. Yet they were of the same nation, children of the same covenant, as their more favored brethren.

“At length the people presented their condition before Nehemiah. ‘Lo,’ they said, ‘we bring into bondage our sons and our daughters to be servants, and some of our daughters are brought into bondage already: neither is it in our power to redeem them; for other men have our lands and vineyards.’

“As Nehemiah heard of this cruel oppression, his soul was filled with indignation. ‘I was very angry,’ he says, ‘when I heard their cry and these words.’ He saw that if he succeeded in breaking up the oppressive custom of exaction he must take a decided stand for justice. With characteristic energy and determination he went to work to bring relief to his brethren.

“The fact that the oppressors were men of wealth, whose support was greatly needed in the work of restoring the city, did not for a moment influence Nehemiah. He sharply rebuked the nobles and rulers, and when he had gathered a great assembly of the people he set before them the requirements of God touching the case.

“He called their attention to events that had occurred in the reign of King Ahaz. He repeated the message which God had at the time sent to Israel to rebuke their cruelty and oppression. The children of Judah, because of their idolatry, had been delivered into the hands of their still more idolatrous brethren, the people of Israel. The latter had indulged their enmity by slaying in battle many thousands of the men of Judah and had seized all the women and children, intending to keep them as slaves or to sell them into bondage to the heathen.

“Because of the sins of Judah, the Lord had not interposed to prevent the battle; but by the prophet Oded He rebuked the cruel design of the victorious army: ‘Ye purpose to keep under the children of Judah and Jerusalem for bondmen and bondwomen unto you: but are there not with you, even with you, sins against the Lord your God?’ 2 Chronicles 28:10. Oded warned the people of Israel that the anger of the Lord was kindled against them, and that their course of injustice and oppression would call down His judgments. Upon hearing these words, the armed men left the captives and the spoil before the princes and all the congregation. Then certain leading men of the tribe of Ephraim ‘took the captives, and with the spoil clothed all that were naked among them, and arrayed them, and shod them, and gave them to eat and to drink, and anointed them, and carried all the feeble of them upon asses, and brought them to Jericho, the city of palm trees, to their brethren.’ Verse 15.

“Nehemiah and others had ransomed certain of the Jews who had been sold to the heathen, and he now placed this course in contrast with the conduct of those who for the sake of worldly gain were enslaving their brethren. ‘It is not good that ye do,’ he said; ‘ought ye not to walk in the fear of our God because of the reproach of the heathen our enemies?’

“Nehemiah showed them that he himself, being invested with authority from the Persian king, might have demanded large contributions for his personal benefit. But instead of this he had not taken even that which justly belonged to him, but had given liberally to relieve the poor in their need. He urged those among the Jewish rulers who had been guilty of extortion, to cease this iniquitous work; to restore the lands of the poor, and also the increase of money which they had exacted from them; and to lend to them without security or usury.

“These words were spoken in the presence of the whole congregation. Had the rulers chosen to justify themselves, they had opportunity to do so. But they offered no excuse. ‘We will restore them,’ they declared, ‘and will require nothing of them; so will we do as thou sayest.’ At this, Nehemiah in the presence of the priests ‘took an oath of them, that they should do according to this promise.’ ‘And all the congregation said, Amen, and praised the Lord. And the people did according to this promise.’

“This record teaches an important lesson. ‘The love of money is the root of all evil.’ 1 Timothy 6:10. In this generation the desire for gain is the absorbing passion. Wealth is often obtained by fraud. There are multitudes struggling with poverty, compelled to labor hard for small wages, unable to secure even the barest necessities of life. Toil and deprivation, with no hope of better things, make their burden heavy. Careworn and oppressed, they know not where to turn for relief. And all this that the rich may support their extravagance or indulge their desire to hoard!

“Love of money and love of display have made this world as a den of thieves and robbers. The Scriptures picture the greed and oppression that will prevail just before Christ’s second coming. ‘Go to now, ye rich men,’ James writes; ‘ye have heaped treasure together for the last days. Behold, the hire of the laborers who have reaped down your fields, which is of you kept back by fraud, crieth: and the cries of them which have reaped are entered into the ears of the Lord of Sabaoth. Ye have lived in pleasure on the earth, and been wanton; ye have nourished your hearts, as in a day of slaughter. Ye have condemned and killed the just; and he doth not resist you.’ James 5:1, 3-6.

“Even among those who profess to be walking in the fear of the Lord, there are some who are acting over again the course pursued by the nobles of Israel. Because it is in their power to do so, they exact more than is just, and thus become oppressors. And because avarice and treachery are seen in the lives of those who have named the name of Christ, because the church retains on her books the names of those who have gained their possessions by injustice, the religion of Christ is held in contempt. Extravagance, overreaching, extortion, are corrupting the faith of many and destroying their spirituality. THE CHURCH IS IN A GREAT DEGREE RESPONSIBLE FOR THE SINS OF HER MEMBERS. SHE GIVES COUNTENANCE TO EVIL IF SHE FAILS TO LIFT HER VOICE AGAINST IT.

“The customs of the world are no criterion for the Christian. He is not to imitate its sharp practices, its overreaching, its extortion. Every unjust act toward a fellow being is a violation of the golden rule. Every wrong done to the children of God is done to Christ Himself in the person of His saints. Every attempt to take advantage of the ignorance, weakness, or misfortune of another is registered as fraud in the ledger of heaven. He who truly fears God, would rather toil day and night, and eat the bread of poverty, than to indulge the passion for gain that oppresses the widow and fatherless or turns the stranger from his right.

“The slightest departure from rectitude breaks down the barriers and prepares the heart to do greater injustice. Just to that extent that a man would gain advantage for himself at the disadvantage of another, will his soul become insensible to the influence of the Spirit of God. Gain obtained at such a cost is a fearful loss.

“We were all debtors to divine justice, but we had nothing with which to pay the debt. Then the Son of God, who pitied us, paid the price of our redemption. He became poor that through His poverty we might be rich. By deeds of liberality toward His poor we may prove the sincerity of our gratitude for the mercy extended to us. ‘Let us do good unto all men,’ the apostle Paul enjoins, ‘especially unto them who are of the household of faith.’ Galatians 6:10. And his words accord with those of the Saviour: ‘Ye have the poor with you always, and whensoever ye will ye may do them good.’ ‘Whatsoever ye would that men should do to you, do ye even so to them: for this is the law and the prophets.’ Mark 14:7; Matthew 7:12.” (Prophets and Kings, pp. 646-652, by Ellen G. White)