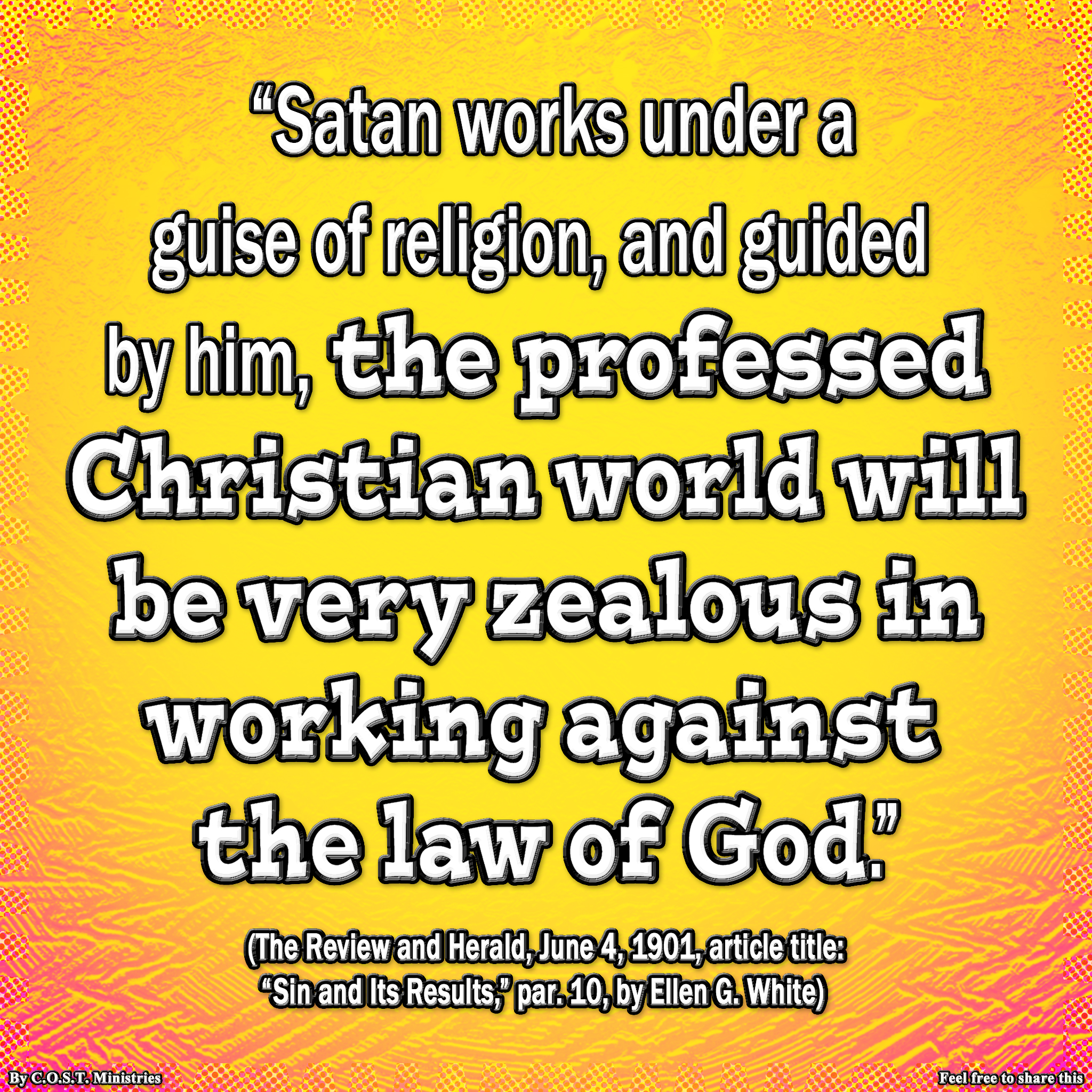 “Satan works under a guise of religion, and guided by him, the professed Christian world will be very zealous in working against the law of God.” (The Review and Herald, June 4, 1901, article title: “Sin and Its Results,” par. 10, by Ellen G. White)

“The question is asked, How is the existence of sin reconcilable with the government of a wise, merciful, and omnipotent God? Why was sin permitted to enter heaven? Why was it permitted to take up its abode on the earth to cause discord and suffering?

“It certainly was not God’s purpose that man should be sinful. He made Adam pure and noble, with no tendency to evil. He placed him in Eden, where he had every inducement to remain loyal and obedient. The law was placed around him as a safeguard.

“Evil originated with the rebellion of Lucifer. It was brought into heaven when he refused allegiance to God’s law. Satan was the first lawbreaker.

“God created Adam, and placed him in the garden of Eden. He told him that if he ate of the tree of the knowledge of good and evil, he must surely die. Satan came to our first parents in the disguise of a serpent, and tempted them to disobey, telling them that if they ate the forbidden fruit, they would be as gods. They yielded to him. Thus sin entered the world.

“God had power to hold Adam back from touching the forbidden fruit; but had He done this, Satan would have been sustained in his charge against God’s arbitrary rule. Man would not have been a free moral agent, but a mere machine.

“The law was given to man in Eden, ‘when the morning stars sang together, and all the sons of God shouted for joy.’ But sin entered the world. And during their years of bondage, the children of Israel lost sight of the commandments. God delivered His people from bondage, and from Mount Sinai proclaimed to them His law. Look at this law. It is God’s holiness made known. It is an expression of God’s goodness; for it makes known what the Creator expects from His creatures.

“The law of God is immutable. Were it otherwise, no confidence could be placed in his government. God rules the world in omnipotence, and all that His love inspires He will execute. He who rules the world in wisdom and love is a God who changes not. He does not abolish today that which He enforced yesterday.

“Through all the ages Satan’s work has been the same, — to make of none effect the law of God. He has infatuated men and women, leading them to mistake darkness for light, and error for truth. He began this work in heaven, and ever since, he has been trying to deceive. He tells men and women that God has abrogated all law, and will now open the gates of heaven to transgressors. He declares that his expulsion from heaven was a severe and uncalled-for action, and that those he led in rebellion may now enter into heaven; for his effort to abrogate the law has been successful, and God’s government has been changed. But were this so, Satan would have done on earth that which he attempted to do in heaven, and he would therefore be entitled to the throne of heaven as the chief ruler.

“Those who accept Satan’s reasoning are terribly deceived. They accept a position which has no true foundation. God is unchangeable. He is satisfied with nothing short of perfect obedience. Perfection is the only title which will gain admittance to heaven. The law is the only standard of character.

“The law of God and the law of Caesar have come into collision, and will come into collision again. The question we have to answer is, Shall we obey God, or Caesar? A great movement is now on foot to put the first day of the week in the place of the day God has sanctified and blessed. SATAN WORKS UNDER A GUISE OF RELIGION, AND GUIDED BY HIM, THE PROFESSED CHRISTIAN WORLD WILL BE VERY ZEALOUS IN WORKING AGAINST THE LAW OF GOD. Satan is leading men and women to complete the ruin he began in heaven. He is willing for the world to declare that the calamity by land and sea and the destruction by flood and fire, are because Sunday is desecrated. Herein lies his deception. He is well pleased when men and women exalt Sunday; for he has been working for centuries to place the first day of the week where the seventh should be. Of those who so zealously carry out the enemy’s designs, God will inquire, ‘Who hath required this at your hand?’ ‘To obey is better than sacrifice, and to hearken than the fat of rams.’

“Men say in regard to the Sabbath, It makes no difference what day we keep, provided we keep the seventh part of time. How dare they substitute the word of man for the word of God? How dare they lead their fellow men away from obedience to the Creator? The Sabbath is God’s memorial of creation, and had it always been observed, there would never have been an infidel or an atheist in our world.

“Let man with his human theories step aside. Let the divine voice be heard, saying, ‘Ye shall keep the Sabbath therefore; for it is holy unto you: . . . it is a sign between me and the children of Israel forever.’

“Many commit themselves to a course that insults the Spirit of God, and that in the face of the convictions of conscience. They make a free choice of the wrong side. They rebel against God. Mercy is despised, and justice defied. They become spiritually palsied, not because they cannot submit to God, but because they will not. Their feet are set in the way of the froward, and they have no desire to turn back.

“The flood which came upon the old world proclaimed the verdict, Incurable. The overthrow of Sodom declared the existence of a far-reaching corruption beyond the hope of recovery. Christ declared, ‘As it was in the days of Noe, so shall it be in the days of the Son of man.’ ‘Come out from among them, and be ye separate,’ is the call, ‘and touch not the unclean thing; and I will receive you, and will be a Father unto you, and ye shall be my sons and daughters.’

“The law of God is made void, and God calls upon us to stand in defense of the truth. Satan is a powerful general. He had a long experience in the heavenly courts, and he knows how to mingle right sentiments and principles with evil. He knows how to misapply and wrest the Scriptures. Herein lies the power of his deception. Thus he deceives men, and seeks to obliterate the line of demarcation between believers and unbelievers. God calls for faithful Calebs, who will stand firmly and steadfastly at their post of duty.

“Our work is aggressive. We need the heavenly anointing, that our spiritual eyesight may be clear. We are living in the last remnant of time. Truth is now to be sought for as hidden treasure. The commandments of men have taken the place of the commandments of God. The Lord calls upon His workmen to watch and work and pray. Precious truths are to be recovered from the human traditions under which men have buried them. God desires His people to show a constantly increasing interest in the things of eternity. He desires us to value more highly the favor of His friendship. Let us not become Satan’s agents to belittle the solemn, important truth which we profess to believe. Let us not show an evil heart of unbelief in departing from the living God.

“God did not give His only begotten Son to die on the cross of Calvary in order that man might have liberty to transgress His law. He did not pay such an expensive price to make His law null and void. The falsehood that Christ died to abrogate the law originated with the enemy of all good. By giving His life for the life of the world, Christ placed the immutability of the law of God beyond controversy. His death on the cross is an indisputable testimony that not one jot or tittle of the law shall ever fail. Hear the words of the Saviour, ‘Think not that I am come to destroy the law, or the prophets: I am not come to destroy, but to fulfill. For verily I say unto you, Till heaven and earth pass, one jot or one tittle shall in no wise pass from the law, till all be fulfilled. Whosoever therefore shall break one of these least commandments, and shall teach men so, he shall be called the least in the kingdom of heaven.’ The disobedient will never find entrance there. ‘But whosoever shall do and teach them, the same shall be called great in the kingdom of heaven.’

“God weighs every man in the balances of the sanctuary. In one scale there is placed the perfect, unchangeable law, demanding continuous, unswerving obedience; if in the other there are years of forgetfulness, of selfishness, or rebellion and self-pleasing, God says, ‘Thou art weighed in the balances, and art found wanting.’ But Christ has made it possible for us to keep the law. He lived on this earth a life of perfect obedience, that His righteousness might be imputed to us. To us is given the glorious assurance that though we have fallen through disobedience, we may, through the merits of the Son of God, hear the words, ‘Well done, good and faithful servant; . . . enter thou into the joy of thy Lord.’” (The Review and Herald, June 4, 1901, article title: “Sin and Its Results,” pars. 1-18, by Ellen G. White)