The Scenes on the Day of Pentecost Will be Repeated 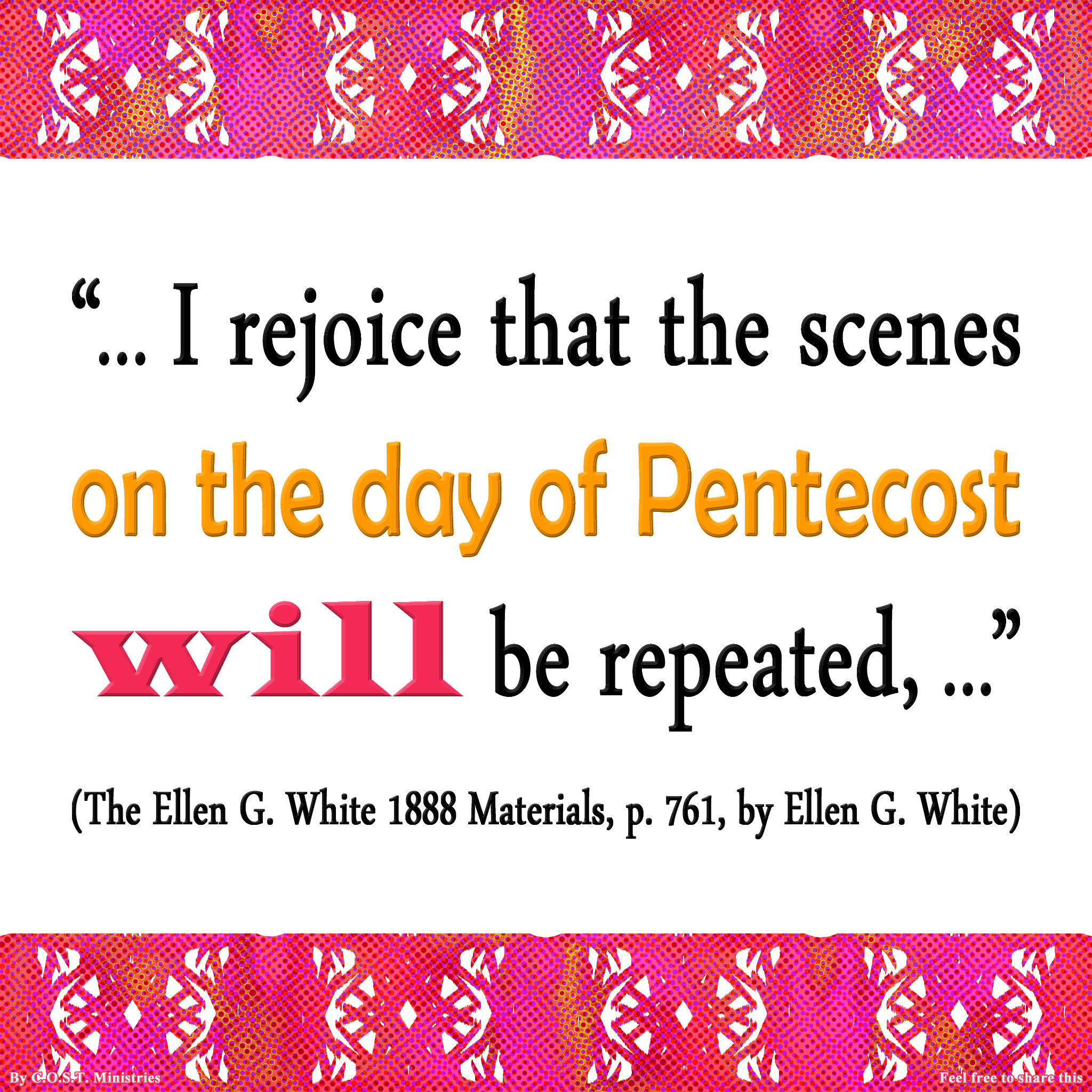 “We left Lynn, December 18, Thursday evening. We had all the help we needed in getting us to Boston and on board the sleeper. As the price for one berth was three dollars the entire distance to Washington, Sarah decided to save the three dollars and go into the day coach. The porter told her not [to] go into the day coach, as there were several berths unoccupied. He told her [that] after the sleeping car conductor had taken his berth, he would make her up a berth. This she refused to accept. She told him it would not be strictly honest and she would take her chances in the day coach. The porter then went to the conductor and talked with him, and the conductor then asked her to remain. They did not make her up a berth but gave her two seats to make herself as comfortable as she could. She slept well through the night. I did not sleep as well as usual, for my arms would become almost paralyzed with the hard bed. I was obliged to rub them and work over them, for they seemed about helpless.

“We had beautiful weather. The air was cool and bracing, and the cars were not overheated. We found in the morning we could not reach Washington on time at eleven o’clock, for we were three hours behind time. We tarried one hour in Baltimore and reached Washington at three o’clock p.m. As there was no one to meet us, the porter secured a hack, and the hackman took us to the mission. We were thankful to get trunks and all arranged before the Sabbath, and after this we shall always endeavor to make arrangements to get to our place of destination on Thursday.

“They had about given up our coming but were glad indeed to see us. Sabbath I spoke on Isaiah 58. I had freedom, as I have had in every instance in speaking on this tour. We had a hall well filled, and we had an excellent social meeting. We know the presence of the Lord was in the meeting. The softening, subduing influence of the Spirit of God was there, and the testimonies borne were good.

“I was at the forenoon meeting on Sunday. The reading of the article of Elder Olsen’s was deferred for this day. Brother [J. S.] Washburn selected a portion of the article for several to read. A Methodist exhorter and his wife are soundly converted to the truth–Baker, I think, is his name. While reading the portion assigned him, which was a quotation from the Testimonies, he tried and tried to read it, but he had to wipe away the tears so often, and then his glasses, of course, were dimmed, and when he came to some portions of the quotations he just broke down and cried. He turned to Brother Washburn and handed him the paper and said, ‘You take it; I cannot read it.’ But all these pauses on that occasion only made the effect more impressive. Brother Washburn told him to take his time and read on. Then after reading we had a solemn season of prayer. I had the spirit of intercession, and there was deep feeling in the congregation. I then spoke about thirty minutes with much of the Spirit of the Lord upon me. All speak of these two meetings as being excellent.

“Sunday eve a larger hall was obtained and I spoke to a goodly number of outsiders as well as the church. I had much freedom, and all listened as if spellbound. I do not choose to speak evenings, but I can see no other way to get the congregation. A collection was taken up which more than covered the expense of the hall. They have a hall engaged for three evenings in the week. This hall was secured for only one evening. It was a dance hall, but there was excellent ventilation. All seemed to be much pleased with the congregation last evening.

“I have an appointment for tonight. Sunday we had a little shower, but it was all clear in the evening. All the help I have here is Elder Washburn. This will throw considerable labor upon me, but I shall try to be careful. I had a malarious attack, but [it was] not serious. I am feeling quite strong and of good courage in the Lord. I tried to have them release me two evenings this week to speak twice in Baltimore, but they are unwilling I shall go, so I am in for it over next Sabbath and Sunday.

“All were disappointed that you did not come. And as you did not come to the first of the meeting I do not think it would be advisable for you to come now. I thought it would not be best to visit Philadelphia after this Washington meeting, for we would have to return back here to use our permits, and we will go (via) the Ohio and Cincinnati roads and visit Battle Creek, and then I can make arrangements for a new departure if it seems to be duty. We shall have been [away] from home three months engaged in continuous labor.

“I expect a letter from you as soon as it can reach here. This is an important place, and perhaps it is well for me to put the strength of labor in this place as the Lord shall sustain me by His grace and power.

“I shall have Brother Davis attend to my teeth while here. There are several cases who are in the valley of decision. We hope they will decide to obey God.

“Sabbath next will be a special day of fasting and prayer and earnest labor for me. And I shall trust in God, who is my helper and my God, for strength. He has graciously helped me, and I believe He will help me still. In anticipation I REJOICE THAT THE SCENES ON THE DAY OF PENTECOST WILL BE REPEATED, and that indeed the power of the grace of God will be bestowed in a wonderful manner.

“I think of the meditation of Christ and the promise, ‘I will not leave you comfortless: I will come to you’ (John 14:18). The agency of the Holy Spirit is to combine with human effort, and all heaven is engaged in the work of preparing a people to stand in these last days. The end is near, and we want to keep the future world in view. The burden of my prayer is that the churches may be aroused from their moral torpor and awaken to earnest, interested endeavor. Oh, that they could see and understand that in this last conflict the Captain of the Lord’s host is leading on the armies of heaven, and mingling in the ranks and fighting our battles for us. We shall have apostasies; we expect them. ‘They will go out from us, because they were not of us’ [cf: 1 John 2:19]. ‘Every plant, which My heavenly Father has not planted, shall be rooted up’ (Matthew 15:13).

“The angel, the mighty angel from heaven, is to lighten the earth with his glory, while he cries mightily with a loud voice, ‘Babylon the great is fallen, is fallen’ (Revelation 18:2). Oh, how I wish the church to arise and shine because the glory of the Lord has risen upon her. What can we not do in God if every human agency is doing its very utmost! ‘Without Me ye can do nothing’ (John 15:5). We would lose faith and courage in the conflict if we were not sustained by the power of God. Every form of evil is to spring into intense activity. Evil angels unite their powers with evil men, and as they have been in constant conflict and attained an experience in the best modes of deception and battle, and have been strengthening for centuries, they will not yield the last great final contest without a desperate struggle. All the world will be on one side or the other of the question. The battle of Armageddon will be fought, and that day must find none of us sleeping. Wide-awake we must be, as wise virgins having oil in our vessels with our lamps. What is this? Grace, Grace.

“The power of the Holy Ghost must be upon us, and the Captain of the Lord’s host will stand at the head of the angels of heaven to direct the battle. Solemn events before us are yet to transpire. Trumpet after trumpet is to be sounded, vial after vial poured out one after another upon the inhabitants of the earth.

“Scenes of stupendous interest are right upon us, and these things will be sure indications of the presence of Him who has directed in every aggressive movement, [the One] who has accompanied the march of His cause through all the ages, and who has graciously pledged Himself to be with His people in all their conflicts to the end of the world. He will vindicate His truth. He will cause it to triumph. He is ready to supply His faithful ones with motives and power of purpose, inspiring them with hope and courage and valor in increased activity as the time is at hand.

“Deceptions, delusions, impostures will increase. The cries will come in from every quarter, ‘Lo, here is Christ! Lo, there is Christ!’ ‘But,’ said Christ, ‘Go ye not after them.’ There will be one fierce struggle before the man of sin shall be disclosed to this world, who he is and what has been his work. While the Protestant world is becoming very tender and affectionate toward the man of sin, shall God’s people take their place as bold and valiant soldiers of Jesus Christ, to meet the issue which must come, their lives hid with Christ in God? Mystic Babylon has not been sparing in the blood of the saints, and shall we be wide-awake to catch the beams of light which have been shining from the light of the angel who is to brighten the earth with his glory?

“Wake up the mighty men. Let the messages of the past 50 years that have been sounding now be seen in their true force and bearing by repetition. Let the same spirit which attended these messages come into our hearts in these last days. These things are not [to] be mentioned with gloom and sadness.

“We are [to] think how heaven regards these events, and to be in harmony with the transactions going on in heaven in preparing a people to stand in this, the day of the Lord, and having done all to stand [Ephesians 6:13]. Let the light and power of the sunbeams of righteousness enter into the soul. [Revelation 19:1-6, quoted.]

“We are not to be of sad countenance. We are not to mourn and lament because of our trials, although we shall sigh and cry for the abominations done in the land. But I did not think of writing on this strain. I will stop where I am. May the Lord bless you and make you stand firm, wholly on the Lord’s side. The bell rings for breakfast.–Letter 112, 1890.” (The Ellen G. White 1888 Materials, pp. 758-763, by Ellen G. White)