When Truth is Forsaken the Mind Fastens Upon Error 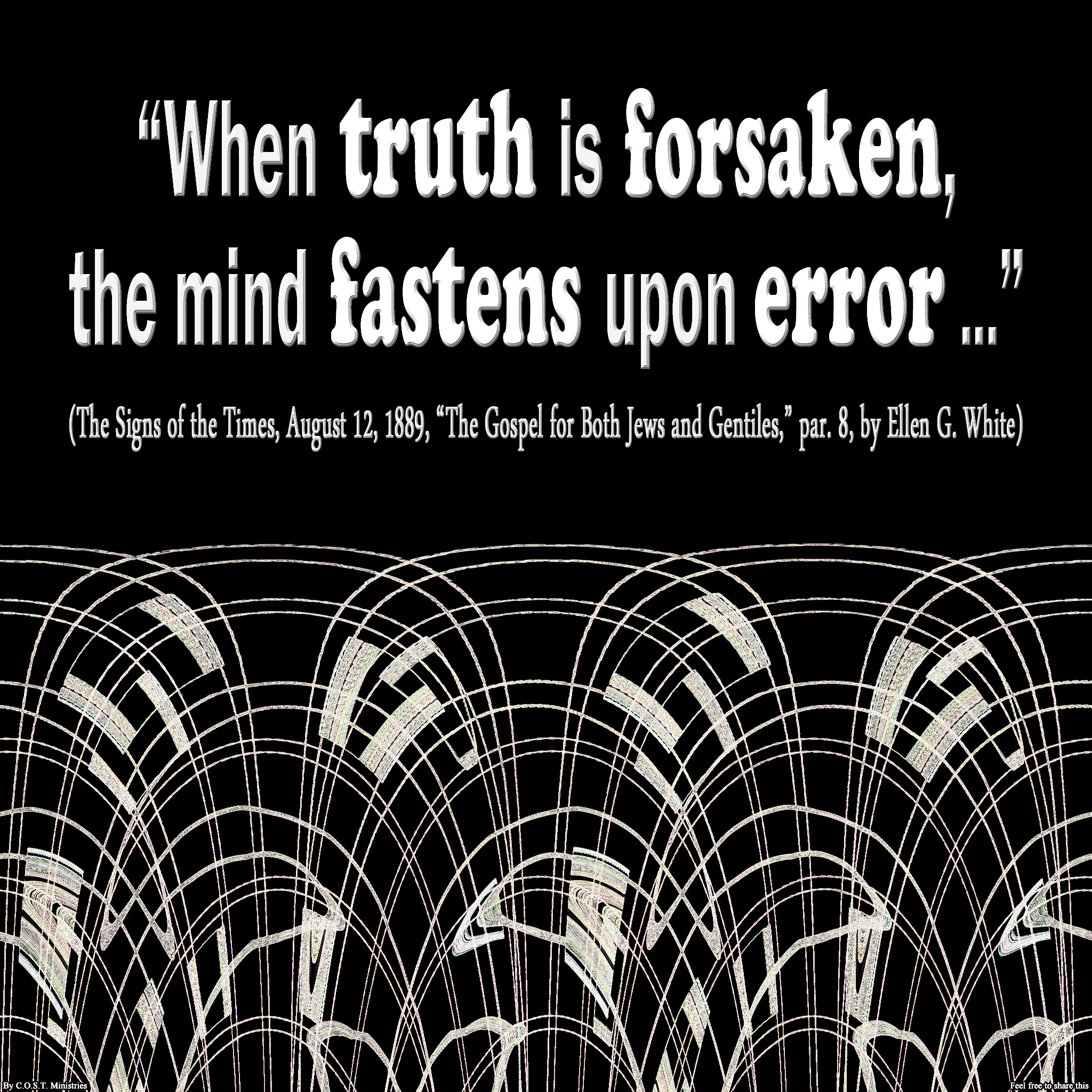 “The people of Israel had been taken out of idolatry, to become the depositaries of sacred, ever-living truth. The knowledge of the one true God was given to them. They were greatly blessed with divine revelations, enshrouded in symbols and ceremonies, until type met antitype in the death of Christ. Everything in both their private and their public life was connected with a revealed religion. The law of God was given by Christ, and specified so plainly the duties of private, social, and public life, that none needed to err. One God, the Creator of the heavens and the earth, was brought to view in the fourth commandment, and his will was to be their will. Those who worshiped the one true God were strengthened in moral power, and developed strong and symmetrical characters, while those who worshiped other gods grew more and more debased, because they exalted human passions and sanctioned vice in their religious services.

“The religion of Israel was a living light from Heaven, that flashed its rays into all the broad ways and byways of life. Says the psalmist: ‘He showed his word unto Jacob, his statutes and ordinances unto Israel. He dealt not so with any nation, neither had the heathen knowledge of his laws.’ They were taught not only that the Lord was to be worshiped, and his holy law obeyed, that its principles were to govern them both in private and public life, but that their religious services were in anticipation of a better service. Their faith was directed to Him who was to come. By faith their hearts reached forward to the great antitype. They were constantly looking forward for the appearance of the Messiah foretold in prophecy.

“Satan was not inactive during the Mosaic dispensation. He continually tempted God’s people and led them into idolatry. At the foot of the very mount where the glory of God had been displayed in wonderful majesty, he led them to worship the golden calf, and again and again they fell into the grossest idolatry, because they cherished an evil heart of unbelief. Pride, love of display, love of pomp and pleasure, had a controlling influence upon them.

“When Christ came into the world, Satan had so filled the minds of men with falsehood in regard to the object of his coming, that those who had been so thoroughly instructed in regard to the long-promised Messiah did not recognize the Son of God as the divine Saviour. He did not come as their proud hearts had imagined he would come. Their superiority to other nations consisted in the light which Heaven had given them; but when they refused to walk in it, they were no better, but rather worse than other nations. Their own selfish ambitions and disregard of God’s commandments dragged them down from the spiritual eminence on which God had set them. They fell into envy, jealousy, hatred of all that was pure and holy in character. They despised the divine One who stood among them, who was able to save to the uttermost, or destroy utterly. But their crime reached its height when Jesus was rejected and crucified.

“In the days of Paul there were men who professed the truth and who held it in unrighteousness. There were those who claimed to be keeping the law when they were transgressors of the commandments of God, and thus, by precept and example, they made of none effect the holy precepts of Heaven. The apostle points out the iniquity of those who despised the Gentiles because they had no knowledge of the law, when they themselves, who had been blessed with so much light, were ungodly, and insensible of the mercies of God. They departed from the known precepts of the law, and their foolish hearts were so darkened by the practice of iniquity that they did not realize their own inconsistency. Professing themselves to be wise, they became so self-sufficient, and so corrupt of heart that God gave them up to their own foolish imaginations.

“Those who have a knowledge of the law of God, and become proud of that knowledge, despising others who are more ignorant, are not doers of the law. While the apostle admits that the Gentiles were as dark and sinful as the Jews represented them, still he urges home upon the Jews their own defects of character. He says, ‘Therefore thou art inexcusable, O man, whosoever thou art that judgest: for wherein thou judgest another, thou condemnest thyself; for thou that judgest doest the same things. But we are sure that the judgment of God is according to truth against them which commit such things.’ Those who acknowledged God, and condemned the practices of the Gentiles, thereby condemned themselves, as they were guilty of similar practices. He asks, ‘Thinkest thou this, O man, that judgest them which do such things, and doest the same, that thou shalt escape the judgment of God? Or despisest thou the riches of his goodness and forbearance and long-suffering; not knowing that the goodness of God leadeth thee to repentance?’

“The Gentiles are to be judged according to the light that is given them, according to the impressions they had received of their Creator in nature. They have reasoning powers, and can distinguish God in his created works. God speaks to all men through his providence in nature. He makes known to all that he is the living God. The Gentiles could reason that the things that are made could not have fallen into exact order, and worked out a designed purpose, without a God who has originated all. They could reason from cause to effect, that it must be that there was a first cause, an intelligent agent, that could be no other than the eternal God. The light of God in nature is shining continually into the darkness of heathenism, but many who see this light do not glorify the Lord as God. They do not permit reason to lead them to acknowledge their creator. They refuse the Lord, and set up senseless idols to adore. They make images which represent God and worship his created works as a partial acknowledgment of him, but they dishonor him in their hearts.

“God bestows upon them favors and blessings constantly. They are partakers of the rich bounties of Heaven, yet they are not thankful for the mercies and blessings that speak to them of God. They do not appreciate the knowledge and grace and forbearance of their heavenly Father. They do not try to establish themselves in truth, and their sinful imaginations lead them away into paths of darkness. WHEN TRUTH IS FORSAKEN, THE MIND FASTENS UPON ERROR, the foolish heart is darkened, and men, professing themselves to be wise in not acknowledging God, become fools, and worship the images of beasts and creeping things, and the works of their own hands.” (The Signs of the Times, August 12, 1889 issue, article title: “The Gospel for Both Jews and Gentiles – [Concluded],” pars. 1-8, by Ellen G. White)